We were approached by Rachael and Sonia, two sisters who wanted to build a holiday home they and their families could share to replace a dilapidated – and cold – chalet that had been in their family for years. The couples reviewed several ideas and eventually concluded that a design that was technically a mobile home would be the best option. However they wanted something that felt robust and would be warm even on the coldest days. Access to the site would not have been suitable for a typical factory built mobile home and the designs they had seen left them unimpressed. As both couples were busy they concluded that a custom package option based on an insulated log system would be best, and commissioned Scandinavian Homes to design and build their new chalet.

A design was developed that allowed the living area to make the most of the stunning views, and provided en-suite accommodation for each couple so that they could have their own space. The chalet is made in two halves so that it complies with the Caravan Act – although it is unlikely it will ever be moved! Following a very wet and cold winter, building the foundations was delayed as it wasn’t possible to access the site – however, once these were in place the build progressed well. The finishing touches were put in place as autumn set in. The build team enjoyed the very warm summer and it is easy to see why Rachael and Sonia want to spend as much time as they can at their holiday home in the coming years. 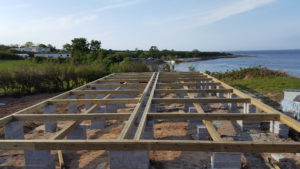 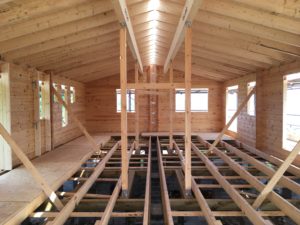 Ready to move in