As you know, the gorgeous house and garden building kits we supply for our clients are manufactured in Finland, land of a thousand lakes, and home to the Santa Claus Village in Lapland, which is where Santa Claus lives (the rest of the world is just wrong when they say he lives elsewhere!).

We thought we’d share some Finnish Christmas traditions with you, and were happy to find some that are similar to our own.

The Finnish call Christmas ‘joulu’ [Yule], a word that comes from the old Nordic word jól which still exists in Icelandic. Oddly, they also sometimes call Santa ‘Joulupukki’ which means ‘Christmas Goat’. There was a Christmas Goat in Finnish folklore who used to come around this time of year and scare people into giving it gifts, and this seems to have eventually merged with Santa Claus!

If you’ve read that Finland is officially the ‘happiest country in the world’ according to the World Happiness Report, you may not be surprised to find that Christmas in Finland is all about family and relaxation.

Finnish Christmas celebrations start on Christmas Eve, which is actually the most important day of the holiday. Traditional breakfast includes a rice porridge and plum jam with a lucky almond hidden in it (rather like the sixpence in a Christmas pudding for those who remember that!).

During the morning, there’s a TV programme called Santa’s Hotline where kids can phone in to speak to the big man in red himself.

At 12.00 Finnish national TV broadcasts the declaration by the Mayor of Turku of the Christmas peace, a tradition dating back centuries, which asks for people to behave quietly and peacefully for the 20 days of the Christmas peace. This is based on old laws under which crimes committed during this period were punished with harsher sentences!

No celebration in Finland would ever be complete without a session in the sauna, and Christmas is no exception, with families taking to the sauna earlier in the day rather than in the evening. Finnish mulled wine, known as glögi, features heavily in the celebrations generally, as the Finns like a drink or two! 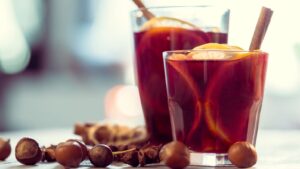 Christmas dinner is a family affair, with a baked ham as the centrepiece. In the evening, traditionally after dinner, but these days often before, someone dressed as Santa arrives on the doorstep in the evening to ask whether there are any well behaved children in the house. If the answer is yes, he will deliver presents! Although the Finns are a secular folk for the most part, many of them do pack the churches for Midnight Mass on Christmas Eve.

Christmas Day itself is a much quieter affair, usually spent at home with family, and then the day after, St Stephen’s Day, is traditionally when people go out to visit friends and family, or go for walks in the country. This is broadly similar to our own Boxing Day tradition, although in Finland all the shops are shut and the gift giving is over and done with.

Perhaps the best thing about the traditional Finnish Christmas is that it happens in a country renowned for deep and lasting snowfall!

Wishing you all a very merry and peaceful Christmas, from the Scandinavian Homes team.